New Boyz on the Block 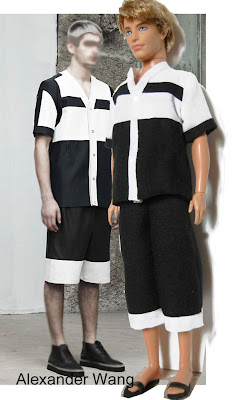 In the seasons to come, Ken is quickly learning that fashion is the sum of its parts. Most of the trends Richard has been reporting to me indicates a strong penchant for graphic color blocking. It can be done with wild splashes of Crayola tones, or bold and urban using the simplicity of black and white.

Today, we show you a sampling of looks which illustrate how the simple shirt pattern can be modified to create a variety of looks.

Once you become accustomed to the proportions of the male doll (broader shoulders, flatter  anatomy and more massive than Barbie), and once you have a good shirt pattern that fits your doll well, making patterns for Ken is more of a game of jigsaw puzzles. We do not have the complication of darts and special seams due to the female doll's curves. On the contrary, it is more about adding, subtracting volume, cutting up flat shapes then piecing them back together. 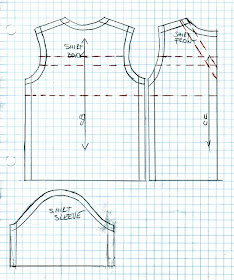 While you could take a big black marker and draw in the shapes, the garments on this page will better resemble their human counterparts if you take the time to cut the shapes and piece them back together.

For the Alexander Wang garment, I started with the basic shirt pattern then drew slash marks where I wanted the black bars placed. Cut the pattern along those lines then add the necessary seam allowance to the top and bottom of each piece. Be careful to label each piece (including straight of grain) so as not to be confused later on. For the placket, I used 1/4-inch bias tape I made myself. You need bias so that it curves around the neck smoothly. 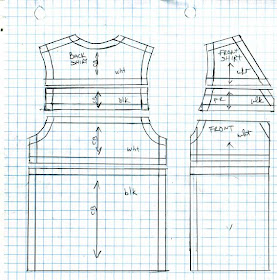 Make it yourself: Take scrap fabric. Determine the straight of the grain and cut 1-inch strips on the diagonal. Fold in half and press. Open. Press each side in towards the center. Fold and press the two sides together and fold it over the raw edges of the shirt. Hand stitch in place. I used tiny sequins to imitate pearl buttons down the CF. The shirt closes with Velcro. 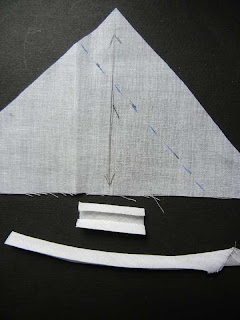 For the trousers, I traced off the original pants pattern. Put your traced pattern on the doll and added extra volume to the legs at the sides. Then drew a new pattern. I added a 1/2-inch band to the end of the pants.

If you do not already have pants for the doll, you can drape a pair using the technique featured in "Panting for More" (2/18/13). 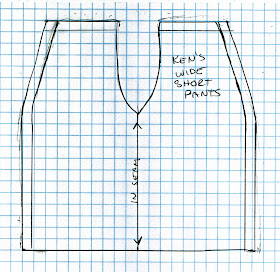 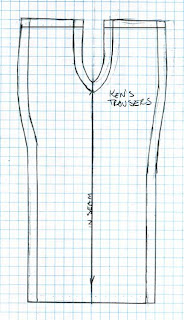 The Gaultier shirt and pants uses the same principle, though is less complicated in that there is only one change of fabric.

For the sweater, is a technique called "Cut and Sew" knits. This means you use knit fabric which is cut using a pattern then stitched in place. The pattern is borrowed from the shirt. The CF and the CB lines are placed on the fold to create a single piece for each side. My knits are super stretchy, so I did not need to make a back seam. 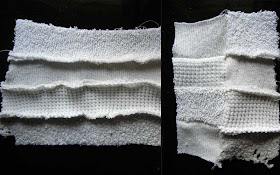 To emulate the look in the photo, I used an old sweat sock and cut it into strips. Then, alternating the textures, I stitched them into a single band (seams side out). Cut this band into quarters. Turn each strip to alternate the texture, then sew everything together. Now cut the front and back pattern out of this. The sleeves are cut from the cuff of the sock. 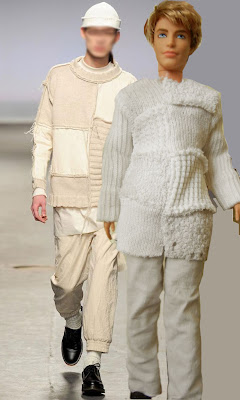 We love hearing from you. Your comment will be published shortly.